Dutch journalist Carel Brendel has published an article analyzing some of the recent membership changes at the European Council for Fatwa and Research (ECFR). According to his report, two of the newly appointed Turkish members representing a strengthening of the alliance between the Global Muslim Brotherhood and the Turkish regime of Recep Tayyip Erdogan:

Ekrem Keles is a senior member of Diyanet, the Turkish Presidency of Religious Affairs that supervises mosques and abroad. According to Turkish media, he is chairman of the Supreme Council for Religious Affairs. The English site of the pro-Erdogan Tukse Daily newspaper Sabah said Keles is “deputy head” of Diyanet.

It appears from the list on the ECFR website Keles is now an official member of the European Council for Fatwa and Research (ECFR). In a 2010 list of ECFR members, there was no Turkish membership. The appointment of Keles means two things- the collaboration between the Erdogan regime and the Muslim Brotherhood has again become a little more intense. And more importantly, the long arm of Ankara interferes with the affairs of all Muslims in Europe.

In 2010 Mustafa Mullaoglu was already on the list, but as a German representative. He has a Turkish background. The German TV channel SWR called him in 2007, “a top official responsible for religious issues of Milli Gorus,” the Turkish version of the Muslim Brotherhood. At a meeting in Hamm, North Rhine-Westphalia, Mullaoglu praised the Ottoman Empire as the ideal form of government.

Meanwhile Mullaoglu moved to Austria where he is a Mufti for the the national umbrella Islamic group, the Islamische Glaubensgemeinschaft in Österreich (IGGIÖ). Earlier this year Mollaoglu received criticism because he ruled that the wearing of  the headscarf hHijab) for women is a religious commandment. Austrian State Minister Muna Duzdar called this position “an attack on freedom and the empowerment of women”. The IGGiÖ was often accused in the past of ties to the Muslim Brotherhood, but always put off the accusation as “conspiracy theories” . Yet critics always place the IGGÏO “in the atmosphere of the Muslim Brotherhood.” Curiously, the Austrian media have very little written about the IGGiÖ  mufti as a member of Qaradawi’s fatwa council.

According to a 2008 NEFA Foundation report authored by the GMBDW editor, the European Council for Fatwa and Research (ECFR) is a central institution of the Federation of Islamic Organizations in Europe (FIOE), the umbrella group comprising the Muslim Brotherhood in Europe and is headed by Global Muslim Brotherhood leader Youssef Qaradawi. According to that report:

The ECFR was established in March 1997 as a FIOE initiative and, according to an academic study, grew out of a history of attempts by the Muslim community to deal with issue of the presence of large numbers of Muslims in European countries.The study also states that the ECFR was “the realization of a wish” repeatedly expressed by Muslim Brotherhood leaders Youssef Qaradawi and Faysal Mawlawi, who were elected as Chairman and Vice-Chairman of the ECFR, positions they still hold today. Both men are living in the Middle East and not in Europe.

The report goes on to say that at that time, anywhere from 1/3 to almost 1/2 of the ECFR members were from non-European, mostly Middle Eastern countries, although the ECFR rules limit non-European membership to no more than 25%. The report also noted that ECFR members included some of the most prominent representatives of the global Muslim Brotherhood, such as former Bosnian Grand Mufti Mustafa Ceric, former FIOE President Ahmed Al-Rawi, and Tunisian Muslim Brotherhood leader Rachid Ghanouchi. The ECFR has a history of fundamentalism and anti-Semitism.

According to a 2002 FIOE document in the possession of the GMBDW, the relationship between 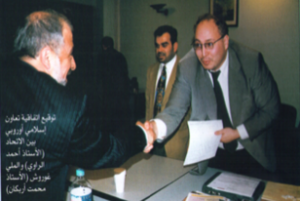 the Global Muslim Brotherhood and newly appointed ECFR member Mustafa Mullaoglu predates by many years his latest appointment to the ECFR. The document contains a photograph of Dr. Ahmed Al-Rawi shaking hands with two individuals identified by confidential sources as Mehmet Erbakan and Mustafa Mullaoglu (right to left), leaders of the German and Austrian branches of the Turkish Islamist organization known as Milli Görüs.The caption of the photograph states “signing an Islamic-European co-operation agreement between the Union (Dr. Ahmad al-Rawi) and Muhammad Arbikan.” The “Union” refers to FIOE where Ahmad Al-Rawi once served as President. (Al-Rawi has been a long-time member of the ECFR).

A 2011 report authored by the GMBDW editor on the Turkish Muslim Brotherhood networks concluded:

The Gaza flotilla incident brought into sharp focus an even more significant long- term development: the growing relationship between the Erdogan government and the Global Muslim Brotherhood, which has given rise to some of the most notorious Islamist terrorist groups – from al-Qaeda to Hamas. Since 2006, Turkey has become a new center for the Global Muslim Brotherhood, while the Hamas regime in the Gaza Strip acted as the main axis for this activity.

As that report also noted:

In June 2013, the GMBDW reported that Youssef Qaradawi had issued a statement calling on the people of Turkey to support Prime Minister Recep Tayyip Erdogan “against foreign conspiracies” as well as praising him for both the Islamization of the country and his anti-Israeli policies

Note 1: Google Translated from Turkish with editing for clarity